Living time without chasing it: the philosophy of Borgo Vione

We all have in mind the image of the White Rabbit running all over the place reciting his stressful mantra: “It’s late! It’s late, you know? I am already in the middle of trouble! I can’t even say “hello” to you: I’m in a hurry! I’m in a hurry, you know? ”

The frenetic character of Lewis Carrol’s novel “Alice in Wonderland” is an icon that is as relevant as ever to describe the pace of life of the majority of the world’s population. You live by running from one place to another in the city, from home to work, between shops, between appointments: a lifestyle typical of large urban and metropolitan centers, where haste , anxiety and noise mark the rhythm of the days of its inhabitants.

According to research promoted by Assosalute, almost nine out of ten Italians suffer from it. An enormity. According to the survey, stress disorders are widespread: 85% of the population interviewed has suffered from at least one disorder in the last six months, while 45% said they had three or more. And it is women and young people who are most affected by this type of disorder.

What are the remedies used by people most affected by stress to try to relieve tension? The most common are rest and recovery of time. Yes, the ability to live slowly. It is no coincidence that in the new millennium the value of time and of leading a “decelerated” lifestyle was rediscovered: the association that promotes the annual Day dedicated to slowness was born in 2007. And since then they have multiplied associations, studies, books, meditation courses and more that promote this lifestyle.

The motto, in essence, is: let’s stop racing against time, let’s learn to live it well. 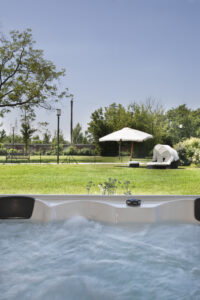 One way To help yourself to recover time and slowness is also to choose a place to live that allows you to do it in a simple, natural way.

And Borgo Vione was born with this philosophy: a few kilometers from Milan it allows you to enjoy the passage of time in peace, without the frenetic pace of the city affecting your way of life, your days. The metropolis thus becomes the place of work and a part of leisure, of course, but the house finds a home in a place where time passes slowly and becomes enjoyable in all its forms.

Regaining time means enjoying a barbeque with the neighbors, taking a dip in the pool, taking care of your body and health with an hour in the gym, reaping the fruits of the earth and trees. Or, simply, take a walk immersed in the silence and peace of the Borgo.

After all, just think of the origins of Borgo Vione, a story whose echo and flavor has been decided to preserve in the restoration work of the structures and environments: a story that takes us back to when it was time to mark the activities of man Not vice versa. There was a time for work, one for relationships, one for rest, one for leisure. Here, this lifestyle, with the necessary and natural changes, is reproduced in today’s version of Borgo Vione: a place where every activity has its space and time and where the day flows in safety and harmony.

The structure and layout of the residences allows for both private and shared outdoor spaces: a fundamental condition to fully spend the day. And even when the climate does not help, in the harshest winter months, several covered common areas still allow you to enjoy the family dimension of the village. Vione is the place to discover if you choose to be guided by time, without that anxiety to dominate it typical of the frenetic urban life patterns.

Unlike the anonymity of the city, in the Borgo one can perceive at the same time one’s privacy and the warmth of the community. There is certainly the feeling of being pampered, knowing that the staff of the village is always available to intervene to solve any technical problem and to provide support.

Last but not least, when there is harmony at home, there is no reason to hurry to run anywhere!