Vione is not just a place. It's a way of thinking and living different from what many of us are used to. I never had to convince anyone to come to live here. All of our friends and clients came by themselves, by their own spontaneous will. Here they find peace and silence, clean air, gardens, nature, but also services that make life simpler, you find the security you want 24/7 and your children can run and play in the mysterious streets of this enchanted city without anything threatening or disturbing them. Your neighbours respect you how you also have to do with them.

In the middle of the plain, enclosed by a moat and medieval walls weathered by time, the village of Vione is a "Grange", a fortified village: one of those settlements of which the Cistercian monks spread in the Po Valley, making them productive, autonomous and which is able to withstand in the case of wars and famines, where everything speaks the tongue of the thin and light fog, the fog that does not wet and that in winter sweeps out the contours of the houses. It is astonishing: the vastness of the open spaces, the courtyards and the dirt roads in it leave literally open mouth. At every step the shapes and proportions of the buildings surprise, very different from each other for age and style, and the green spaces that suddenly open like the beautiful garden of the mansion that seems to never end.

The deep signs of wagons and footprints impressed at the threshold of the two portals of the eighteenth century, tell about travel and exchanges, fairs and markets. They are the footsteps of a past not too far. They have been left them by monks, peasants, merchants, travellers travelling from Pavia to the nearby Milan. The perimeter of Vione is outlined by a series of roads bordering on it and a natural border made up of a dense network of navigable ditches and by the ancient walls that will be restored. The farmhouse is art-protected from Law 1089, today Testo Unico (verificare come tradurre testo unico), is bound to be a monumental architectural monument as a whole.

The safety of living in Vione is absolute: next to the main entrances there is a constantly active custody service available to the inhabitants of the village, while on the ancient walls that surround the settlement and inside it is installed a state-of-the-art video surveillance service always in operation. The custody service is active 24 hours, and not only allows our children to run and play safe but allows entry to the village to non-residents upon registration. It's possible, as it once was, to live quietly, leaving the door open. All this makes Vione a protected and safe place to enjoy the magic of silence and the simplicity of life in the countryside, far from the chaos and noise of the city.

The tranquillity of the place is guaranteed both inside and outside the houses. The houses are refurbished with the most advanced techniques but without destroying that sense of peace that today is possible to breathe. They are old pleasing human scaled houses, but equipped with all the comforts modern technology can provide. The church of S. Bernardo, still consecrated, is open on public holidays and weddings and baptisms can be celebrated here. The ancient mill, used as a cultural centre and library is directly managed by the municipality of Basiglio and is available to residents and the surrounding area. The common areas are concentrated in the building that was once the grain silos and in front of the church where the old weighbridge is located, there is the resident manager's house.

There is a restaurant, a modern spa, a unique gym and a recreation room equipped with video projector with the possibility of organizing courses. The former mill is a meeting place that houses the library and a conference room, a cultural centre available to residents and districts. The inhabitants of Vione can freely access the structures of the Commune thanks to special conventions.

Vione appears today as a small hamlet enclosed within a well-defined reality by walls and an irrigation ditch system. The development in space, just in this village, is due not only to the buildings but also thanks to the extension of the courtyards, to the internal and external roads and to their relationship with the surrounding landscape, which still has the ancient agricultural characteristics despite the advancement of the city (very close now), and is based on the paddies and typical of the Bassa Milanese. It was the landscape of the farmhouse to orient the choices of artistic and architectural recovery, beginning with the appearance of the open spaces that characterize the village of Vione.

The most demanding choice was to preserve the original structure of the spaces, restoring also the ancient buildings location and structure. Also the adjoining campaign is completely unbound and uneditable for an area of about 330 hectares, and it is a huge protection against future new buildings. In the gardens, in addition to some real exotic plant rarities such as the majestic Taxodium Distichum, the Swamp Cypress from the south-eastern United States, planted in the main courtyard, there are mainly fruit trees, a necessary complement to the diet of the inhabitants before and necessary to revive the relationship between man and nature today, to remind and teach children how much more sweet is the harvested fruit of that bought and to make sure that they bring this flavour and their memory for the whole life.

The gardens of the houses, all different from each other, are characterized by the presence of aromatic herbs and flower species and their perfume brings us to the lives of our grandparents. In the courtyards and on the shores were replanted the mulberries, which were introduced in these campaigns in the seventeenth century for breeding silkworms. In spring the inhabitants of the village are enveloped by the scent of the different varieties of roses that colour the iron pergolas in the areas most exposed to the sun; these structures, traditional elements of rural courts, create shaded areas where to stroll in the hot seasons. 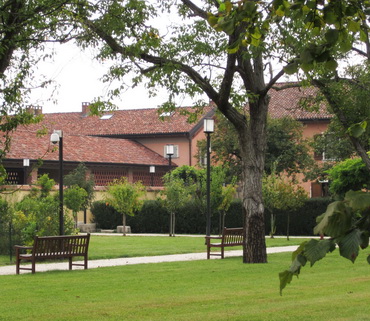 From Basiglio, continuing on to Binasco, crossing the bridge over the Roggia Carlesca, you reach the old suburb of Cascina Vione, at the centre of a dense... 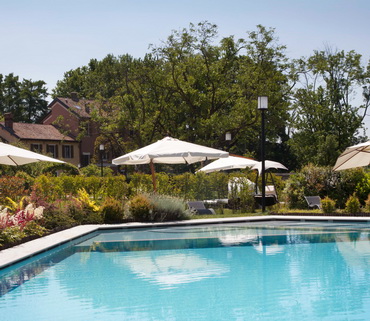 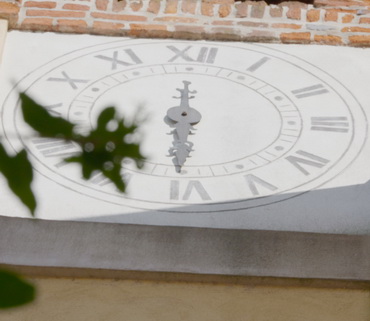